How austere can UK aviation accident environments get?

In August 2016, I was a newly-Cranfield-qualified, UK Defence, air accident investigator. The six-week Cranfield Aircraft Accident Investigation course had been great and I felt confident to deploy out to investigations. It is a well-known fact that most accidents happen at airfields which is an environment I know well; and coupled with my experience and training I felt I was well prepared.

We were notified of an incident involving a Bell 412 (Griffin) helicopter in Snowdonia, which is a mountainous area in the North Wales area of the UK. My first thought was, "Is there even an airfield in Snowdon?". The answer is no; and a quick bit of googling/BBC research quickly appraised me of the situation at hand.

No, the helicopter hadn’t landed in a volcano; it was sat on top of the Yr Aran mountain peak burning itself to a cinder. Thankfully, we were swiftly informed that those on board were all safe and had quickly evacuated the helicopter during the onset of the fire. Suddenly those case studies of the extreme outliers of accident investigation came to mind; those problematic ones we all think will never happen to us.

The first issue was where were we going to base ourselves? Something I hadn’t anticipated being a problem. This accident occurred during the peak UK summer holiday season and there was not a hotel available within an hour’s drive. The closest place we could find to base ourselves was at RAF Valley, over an hour’s drive away. An hour drive to the site doesn’t seem too bad, but that only gets you to the bottom of the mountain. Next stage was a 1½ hour off-road drive up a mountain track in our 4x4 Toyota Hi-lux, which was taken to its absolute limit. At one point I even had to winch the Mountain Rescue Team (MRT) out of a ditch that their Hi-lux had become stuck in (sometimes even heroes need a hero).

Around an hour’s hike from the top we ran out of any semblance of a driveable track and had to dismount our vehicles and decide what equipment we could carry to the accident site. Luckily the MRT and the Joint Aircraft Recovery and Transportation Squadron (JARTS) doubled up as excellent load carriers, and we distributed the essential equipment amongst the team. Day one and 3½ hours later and we finally arrived at the accident site. 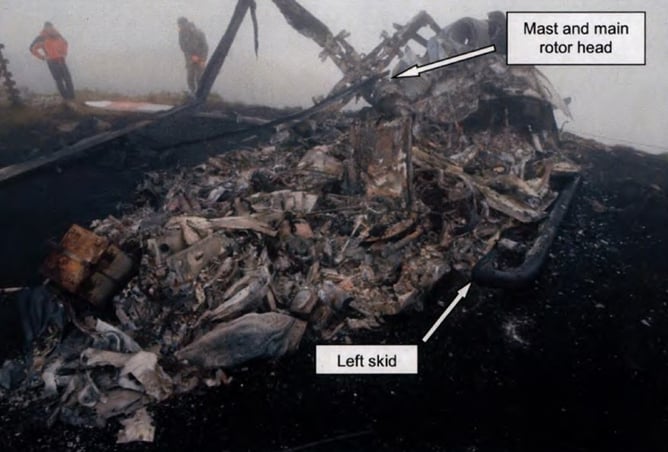 On arrival the aircraft fire had extinguished itself, having had no attention from the fire service who could not access the site and had allowed it to burn out for a number of hours. This did not leave a lot of wreckage as everything with a melting point below around 700 degrees Centigrade had melted into now solid rivers of molten metal. Assessing the structural integrity of what was left was near impossible and on touching the tail section (which appeared at rest) it promptly detached itself and slid two metres down slope. The environmental conditions were also somewhat challenging, varying from glorious sunshine to snow and hail due to the relative height of the site. The site also presented a significant health and safety risk which we also needed to protect curious hikers from as well as our own team.

The challenge of this site was spread over a period of two weeks, from first arrival to the clearance of the team and wreckage from the site. The first piece of evidence any investigator will attempt to harvest is the Flight Data Recorder (FDR). As the "spotters" will know, the "black box" is actually orange in most conditions; in this instance the FDR had been melted away to the actual "black box" within the unit. This was eventually located in the centre of the wreckage, and it was three days before we cleared the wreckage enough to find what was left of the FDR. 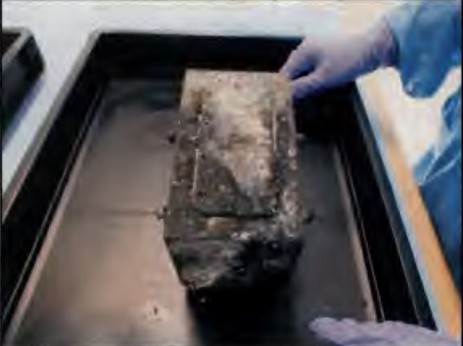 This work involved a near archaeological dig through a chemical soup in all weather conditions after the 3½ hour journey to and back from the site each day.

During the second week we managed to ease the travel time by drafting in aircraft from the victim aircraft’s organisation in Shawbury. They provided us with an airlift capability from the base of the mountain which significantly accelerated the site phase. The final task was the complete removal of the wreckage and environmental remediation of the site. The first task was achieved via a Chinook helicopter from RAF Odiham. The wreckage was netted and transported as an underslung load once the accident investigation was complete. Environmentally, the site was not too bad after the initial burn (which was bad for the atmosphere), as there wasn’t much left behind. With very little topsoil on top of rocky peak, the site was naturally impermeable which helped greatly; and environmental testing confirmed that no contaminants from the accident site had entered local water courses.

This was a very interesting experience from an accident investigative perspective with many lessons learned. The biggest lesson was certainly: when you plan for the worst and hope for the best, bear in mind sometimes the worst does occur.