Potential Parties to an Event: The Reality

This blog post is by author, Linda Tavlin, communications expert, and international consultant and Cranfield instructor, who has trained aviation organisations all over the world including AirAsia and Swiss Air.

Parties to an event

Diagram 1.1 shows an archaic perception of communication. It implies that the media is the centre of everything and all the other potential parties to an event should defer to the media. Clients many times say to me, “If we don’t do this, the media will crucify us or worse.” This philosophy leads them to develop a reactionary strategy and will lead failure. 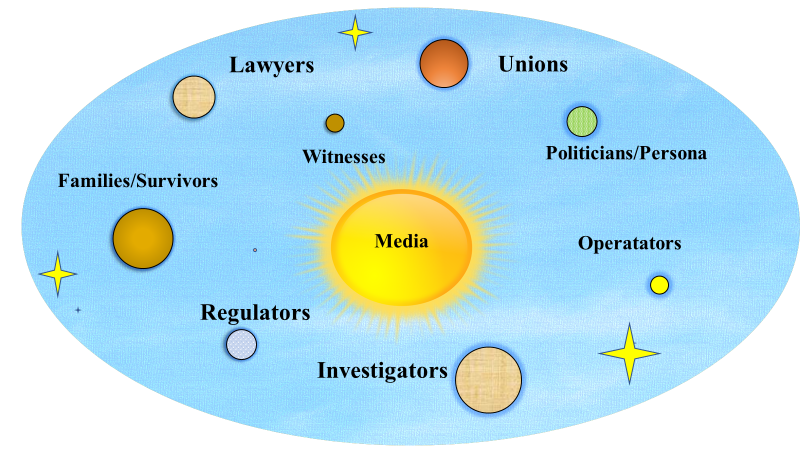 This may have been the reality prior to the onset of social media and the onset of the twenty-four-hour news cycle that began in the 1980s but the reality in today’s world, especially with cell phones, is that anyone can be a journalist and any employee can end up on the evening news or YouTube through no fault (and with no control) of their own.

To say that this is just a new phenomenon since the onset of social media is a fallacy. Within one hour of Swissair 111 crashing I heard someone on CNN comparing it to the ValuJet crash of 1996 because there had been smoke reported in the cockpit and the Swissair 111 tragedy took place on September 2, 1998. Granted the time element was much quicker but the concept is the same – information coming out, whether right or wrong, in the immediate aftermath of an event. And the immediate perceptions are often lasting facts.

Diagram 1.1 focuses on the media as though they are the epicentre of everything. It portrays them as though they are the sun and all the other potential parties to an event are orbiting planets moving around the sun. If an organization has a strategy which incorporates the above older philosophy, then it is a strategy that gives social and traditional media the power to control how the event is reported and perceived. It means you will not be proactively in control of your message and you will be left with a strategy that limits you to reactively answer questions``. If that happens, no matter who the audience, you will be in a position where the party asking the questions will be able to control where they take the discussion because you will merely be following and reacting. The reality is reflected in the chart below. 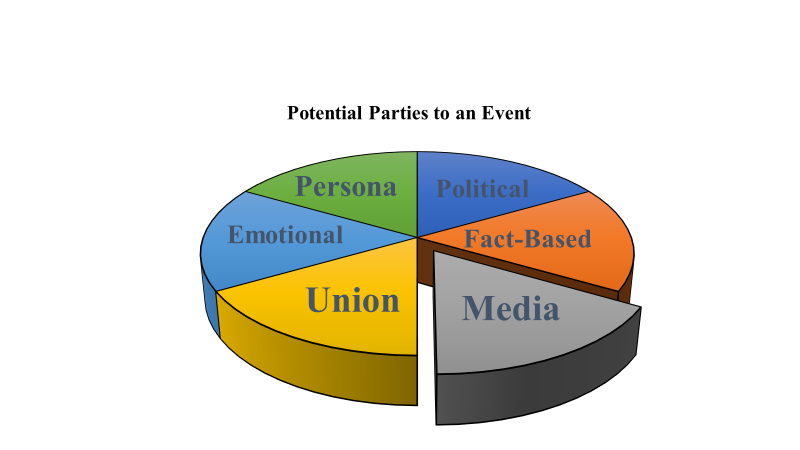 Indications of an opinion are beginning a statement with I think, I feel, or I believe. A fact-based response would go like this: If you look at the fact that we are certified by the regulators of our country and all the countries we are allowed to fly in to, you would know we are acceptable.

The next style of communicating is the political style. This does not necessarily refer to an elected official. It is a style of communicating. The characteristics of those who practice this style are that of someone who comes forward, state what they want (generally self-serving), and a year later when a report comes out, or a law suit is completed the statement may or may not be proven to be true or factual - and a fact-based party to the event then needs to counteract the political statement. Examples of this are those who appear on television within one hour of something happening as the proclaimed industry experts without having any hands-on working relationship with the event at hand, nor verified factual knowledge of the situation. Another example that fits into this category would be the “witnesses have said” or “sources have told us.”

A persona is an individual with stature or star power. People seek him or her out for attention or he/her may seek out attention. He brings attention to an event as well as themselves. You never know if you will have a persona as a party to an event. An example of this would be a corporate CEO with star power such as a Sir Richard Branson. If something happened with Virgin Atlantic, people would expect to hear from him. If it were another airline, the world would not necessarily be familiar with who was the head of the organization. In addition, you never know who might be on an aircraft.

The emotional audience is anyone (individual or collective) who identifies with something that happened. They want two things from an organization. First, they want you to be sympathetic. Second, they want you to be accessible. This means that you must come forward and face them. If you do not do these two things, you run the risk of fuelling the adversarial nature of this audience. If that happens, you will never be done nor successful. The emotional audience triggers the political audience.
Union-style Communication.

The aviation industry is fraught with and influenced by organized labour unions from every part of the industry from the ground to the air. The number one objective of unions is to defend their members. Organizations who also fall in to this category include those who pay to have organizational membership. Unions can insert themselves into dialogue or issues by posturing or using an event to focus on an issue, even if they have no immediate stake in that particular issue or event. An example of posturing would be to say, “we know this issue is going to be a problem so if it happens, don’t blame us.” This is how they absolve themselves in the future. This is exactly what they are structured to do, but organizations who do not incorporate this power into their strategy do not have a strategy that deals with reality. Then when something happens, they blame the unions. But again, it is not the unions’ fault. It is the fault of an organization’s strategy who did not prepare for this potential.

As you can see from the chart 1.1, the media segment is just one party to an event and not the centre of the event. Print media is a business. Electronic media is entertainment and journalism are a class people take in college: true, journalism is swiftly disappearing as reporters have given way to commentators with an agenda. If an organization understands and accepts that, they need to have a strategy that takes it in to account. If their messages are not substantive and are nothing more than public relations clichés, then those clichés are going to be picked up as sound bites and there will be nothing substantive to offset the other side nor make a meaningful contribution to the discussion.

Many nationalities and cultures feel that their media is more oppressive than any other media. Clients from various countries frequently say to me that “people do not understand how our media is. Our media is more aggressive than other media.” Then I hear the same experiences related over and over. If it isn’t something you experience daily, when it does happen it can be overwhelming, but it is that way for everyone within the sphere of that media environment. With major events being universal and aviation being a multinational industry, the media that shows up is generally an international unit.

So many times, clients say, “It isn’t fair” or “I was taken out of context.” Let’s examine these two statements separately.

First, when one says, “it isn’t fair”, it may not seem fair on the surface because a different party to an event may not have the same objective as yours and your strategy must take into consideration an understanding of the objectives of the other parties to the event prior to the development of your strategy. People like to blame the media for everything. It is generally not the media that is the problem. It is the people who use the media to assert their position or agenda. The media is a tool and if you are not looking at them as a tool, then you do not have a strategy that meets reality. When one goes to speak to the media, you are not simply talking to the media. It is important to remember that you are talking through the media to the audience/audiences listening to the media. The media is just a tool for your end game - to use it to reach those audiences you want to hear your message. Ask yourself when developing a strategy, “Who do I want to hear this message?” and not just what that message is.

Second, the statement that one is being taken out of context is an excuse. Clarity is your responsibility. When a party feels they have been taken out of context it generally means that they had the wrong strategy for the situation in which they find themselves. Here is a common example of what I hear. What they may tell me is that, “I met with the media for forty-five minutes and all they showed on the evening news was thirty seconds and therefore it was taken out of context.” I explain that no one gets more than thirty seconds, if that, on the evening news. Therefore, so the fact that they spent forty-five minutes with them was their first mistake.

When I asked if it was, they who generated the story, most of the people I work with tell me no. Second mistake. The problem here is not the media. The problem is the way the client prepared for meeting with the media. The media went through the forty-five minutes and took what fit into their story since it was not the client who generated the story. The client went to answer questions. The media asked questions until they got the thirty second sound bite or answer that fit into their perceived story. End of story! But the client was not taken out of context. Often, the reporters have determined the thrust of their story and are simply searching for answers that support that story line. Again – journalism has changed. Reporters will lead the interview to statements that support their pre-conceived premise IF they are allowed. That happens when the interviewee goes with a strategy to just answer questions and has no messages. Is that the fault of the interviewer? No.

Have a strategy that incorporates reality as it is today taking into account all potential parties to an event and their styles of communication. This holds true for all situations when communication strategies are necessary including dealing with regulators, political bodies, community groups, etc. This information is excerpted from the upcoming book: Aviation Communication: Strategy and Messages for Ensuring Success and Preventing Failures available at Routledge.com. This book is applicable for all employees from technical to commercial as a training, reference and introduction to aviation tool.

This information is in my upcoming book, Aviation Communication: Strategy and Messages to Ensure Success and Prevent Failures, which can be preordered at this link.