Search and Rescue at Sea: Swansea and Stornoway (Part II)

This blog post is part two of two by, Dr Christopher Bennett, Research/Teaching Fellow in Flight Test and Applied Dynamics, at Cranfield University. Since Dr Jim Nixon's blog on search and rescue (SAR) trials at sea in December 2018, the team has conducted two further full-scale trials - this time at night.

Read Part I of the 'Search and Rescue at Sea: Swansea and Stornoway.

Our final sea trial would take us to the Isle of Lewis via a quick connection in Glasgow. The Outer Hebrides are a beautiful part of the UK, but in the middle of a raging storm Gareth, the view out of the Loganair Embraer ERJ-145 on approach to Stornoway was particularly bleak. Jim and I were convinced at this point that our chances of conducting a successful trial were slim. We were welcomed onto the SAR base the next morning to meet the team and to speculatively brief the trial with the aircrew.

Looking out of the ops room window, one pilot remarked “you may think March is spring, but it’s definitely still winter here”. However, Captain Andrew Smith identified a potential gap in the weather for the next evening, and being the hardy bunch that they are, the crew prepared for up to 2 hours of airborne time to conduct our trial.

Next was to meet with the boat crew from Stornoway Seafari. Perhaps expecting it to be a little trickier to convince Gordy and Chris to go out in the wind, rain, high swell, and pitch darkness the next evening, we were impressed that they were more than up for it. Jim and I however, who would also be on-board the boat to help coordinate the trial, were less enthusiastic…

Nevertheless, we boarded the boat the next evening with Gordy, Chris, and the Freds, and set out to sea. Jim and I were put at ease initially, as the water was fairly calm in the early stages. However, as we exited the shelter of the main harbour, the size of the waves seemed to triple, and the wind and rain intensified. 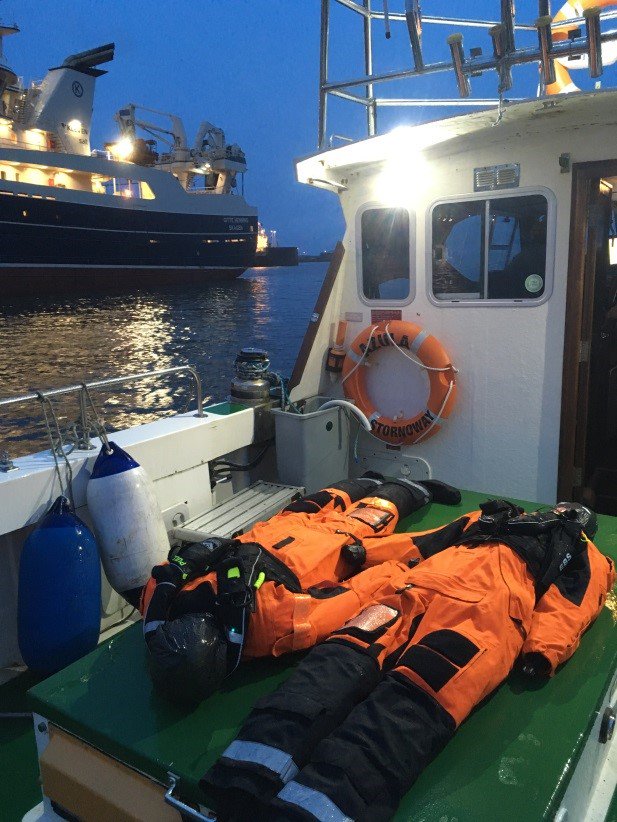 ABOVE: Calm before the storm – Freds aboard Stornoway Seafari’s boat Azula as we exited the harbour.

The planned search area was perhaps a 30 minute transit – we needed to be clear of both the main shipping lane into Stornoway harbour, and also the approach for the airport. We chugged forth into the darkness, hopping over the never ending crests and troughs. The monotony of the rise and fall of the engine note as we bounced along started to make me feel a little woozy. However, on reaching the search area we slowed down, heaved Fred 1 overboard, and manoeuvred to a pre-determined stand-off area. The inbound helicopter was the only light visible all around.

Watching the aircraft track along at 500ft with the searchlight lighting up the swirling sea below was quite a spectacle, and took my mind off the perpetual bobbing around. Jim and I stood on the deck at the rear of the boat tightly holding on to the hand rails, while Gordy and Chris effortlessly navigated the boat with balance developed through years of experience at sea. Perhaps having not expected such rough conditions, they industriously tinkered with the boat, tying down loose articles which were constantly being swept from one side of the deck to the other.

After several passes, the aircrew radioed to say that they were ready for Fred to be swapped over. Now for the tricky part.

The disappearance of Fred

On the boat, we had lost sight of Fred almost immediately after throwing him overboard, despite him wearing a bright orange immersion suit. The rolling peaks and troughs of the swell make it almost impossible to eye-ball anything floating on the surface from sea-level - that’s what the chopper’s for! The aircrew directed us to Fred by pointing with the search light.

While we recovered Fred 1 (well, Gordy and Chris really as Jim and I were struggling to even stand up, let alone haul a sodden 100kg plus dummy into the back of the boat) the helicopter disappeared into the distance to prepare for the next sequence of searches.

ABOVE: Screenshot from the aircraft’s FLIR camera footage, which shows us recovering Fred 1 (the white blob in the water at the back of the boat). Notice Jim and I looking on from the cabin, Fred 2 lying on the table on the deck, and Gordy and Chris doing the actual work.

Having identified Fred 1 in each of the 4 runs (this was the modified suit trial, but the aircrew didn’t know which order we were going to put out the Freds), one may have assumed that they’d have got their eye in, so to speak. This was not the case - the aircrew were unable to find Fred 2 in any of the second sequence of searches. This was music to Jim and I’s ears from a data point of view as it proved the effectiveness of the immersion suit modification, however, Fred 2 was well and truly lost…

Fortunately, we had a plan for such an eventuality. We had attached a personal locator beacon (PLB) to Fred before ditching him in the water. We instructed the aircrew to dial up the signal on their receiver to help find him. This worked a treat, and soon enough Fred 2 was back on-board safe and well, if not a little cold. I, on the other hand, was feeling rather queasy from the 2 hours of intense bobbing around in the darkness. With no visible point of reference it is impossible to stay orientated, and I was concentrating very hard on retaining my haggis lunch. Quick to get us back on dry land, Gordy pointed the boat at Stornoway harbour and floored it. We reached the dock just before 10pm and I proudly hopped ashore having once again avoided an embarrassing projectile incident. The trial had gone perfectly and as such, Jim and I made tracks to the local for a celebratory pint.

The next morning we met with the aircrew at Stornoway airport to debrief and download the FLIR footage. After a brief panic when we thought the audio hadn’t recorded properly, we sat down to go through the results. The heavy rain hampered the use of the FLIR system, and so the crew were predominantly searching for Fred using their NVGs. The pilots remarked that the reflective tape provided a glint of orange that cut through the murk, allowing them to find Fred 1 on all 4 passes. With Fred 2, they were just relying on colour contrast rather than a reflection, and as a result were unable to find him during the second phase of the trial. This dataset was to be the final piece of the jigsaw for the CIMSCY project. The next morning, tired from a long week of adventures, Jim and I flew home. As I looked out of the window on approach to Birmingham, Storm Gareth seemed a distant memory as the clear skies and rolling green landscape once again showed the promise of spring. I would be back in the office on Monday morning.

The Port Talbot and Stornoway sea trials were a success, demonstrating the effectiveness of the additional retro-reflective material on our modified immersion suit perfectly. We are currently writing up the results in the final report as I speak. We plan to travel to Cologne to present the findings and recommendations from the project to EASA in the coming weeks. This grilling will mark the end of our CIMSCY adventures.

Obviously, none of what I’ve described above would have been possible without the help and support of everyone involved – a list of acknowledgements is given below. Thank you all, we are truly grateful. We hope that this work can contribute to improvements in the safety of aircrew in the future.

To find out more about what it might be like to study a Transport Systems course at Cranfield University, check out the video below.