Searching for the future of SAR

When you're in trouble what has to happen for helicopters to find and rescue you?

HM Government have a private helicopter company providing search and rescue as well as other services to the Maritime and Coastguard Agency. This is currently provided by Bristow Group Inc. According to UK GOV-provided data regarding sorties under this contract, there were 11,212 missions in all, covering a variety of taskings. The majority were rescue and recovery missions but there were a variety of other needs as well.

The array of missions were from as early as 2015 through to 2020. As you can see from this small section of missions from Portland which I’ve plotted on a map there was a wide array of requirements.

Once we have operational data we can start to ask interesting questions that can be useful in future. How often are these services needed? What distances do they tend to have to travel to accomplish different mission needs?

The aircraft used for these missions are a mix of Leonardo AW189 and the Sikorsky S-92; however, there are some missions in this data which are well beyond the range of these helicopters so perhaps some are detached duties or multi-leg refuelled missions.

It isn’t made clear which aircraft are performing which missions and a database of missions performed under the UK SAR contract is not the same as a database of taskings which required aircraft support in some way or another. We can only reason using the data from what did happen rather than the data from what might have been. However, this sort of operational research can still be useful to support future operational planning. Future MCA needs may include some mix of long range drones, helicopters, compound helicopters, and perhaps even small multirotor drones. Some of us may wish we could have Thunderbird 2 fly into view to provide the necessary equipment to save lives in the nick of time but sadly we must make do with more mundane options. Understanding trends in rescue helicopter use could well allow us to spend the money we have more wisely and perhaps save more lives.

There is a network of private air ambulance services and police helicopters that also provide important services within this context. The future of air/sea rescue, air ambulances, police helicopter support and other needs may have opportunities for collaboration and sharing of good practice between fleets which perform difficult operations in bad weather and at low altitude.

The data made available to the public will be used by companies looking to offer a competing service suitable for the next generation SAR contract which is due to start 2024.

Future research could include using this data with population growth models hosted by DAFNI to create mission simulations. This could be used to evaluate the impact of changing aircraft types, basing locations, and the methods used between drones, helicopters, and fixed wing aircraft. Perhaps even seaplanes, hovercraft, or ekranoplan could be the next big solution?

When it comes to imagining what search and rescue might look like in 2024 and beyond the sky's the limit! 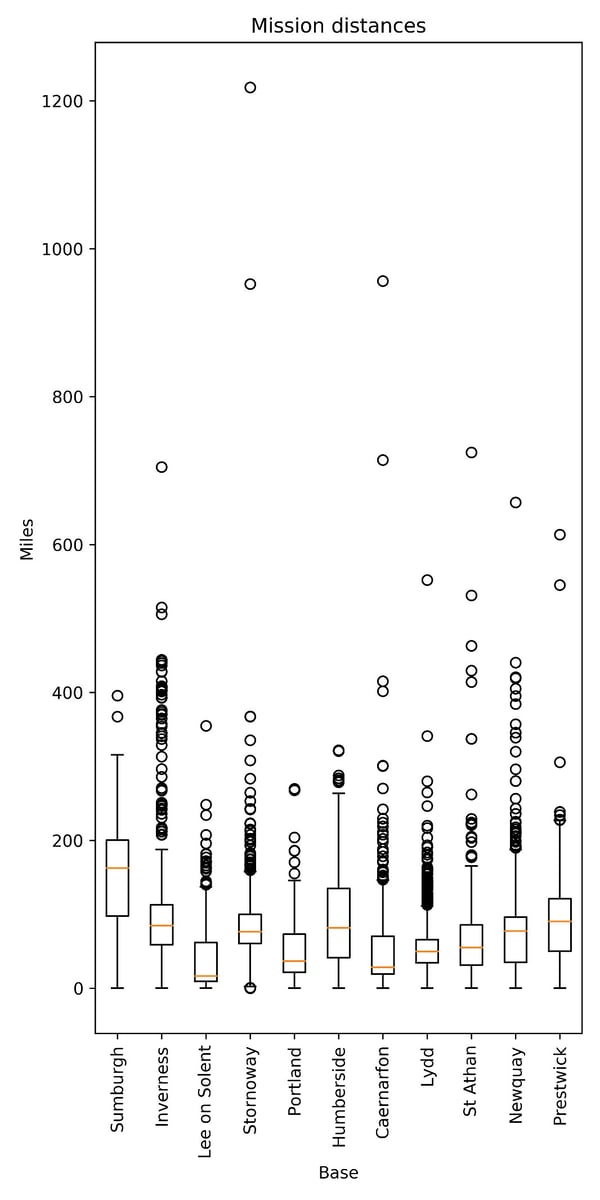