Uber Elevate is Rising to the Challenge

The set-up of the Summit reminded me of Apple Worldwide Developer Conference (WWDC), Google I/O, and Facebook F8 – shiny people talking about shiny new, disruptive tech fresh out of Silicon Valley. I was half expecting someone with a black turtleneck to come out at some point and say: “One more thing…” and then the crowd would go wild. (Un)fortunately that did not happen, but the event did feel more like a show rather than a conference – mainly because there was no opportunity for Q&A – which drove some of us mad with curiosity. Nevertheless, the Summit was one of the most inspiring events for the cautiously optimistic aviation enthusiasts and technophiles, like me.

So, other than more questions and no answers, what did I take away from the Summit? What inspired me? And what issues have been keeping me awake at nights since – other than my jetlag?

Here are my takeaway points:

1. Uber Elevate has been doing a lot of groundwork

Firstly, how does Uber’s proposed ‘urban air mobility’ (UAM) work in UberAir’s concept of operations? Disappointingly, they will not be taking off and landing from your neighbour’s garden and fly around like the Jetsons!

The electric aircraft will take off and land vertically from ‘skyports’, which are essentially repurposed buildings (such as multi-storey car parks) with helipads. Skyports provide connections between larger terminals like airports and parts of a city, and serve as a hub for other transportation modes. Passengers can get to and from skyports with Uber cars, Uber electric bikes, or existing ground public transport. Typical flights are around 15 minutes long, with most electrical vertical takeoff and landing (eVTOL) aircraft designed to carry four passengers and their luggage on a single pilot operation, with the possibility of fully autonomous operation in the future.

There are a lot of elements involved in a multimodal ridesharing operation, and Uber Elevate is acutely aware of this. They have been getting everyone involved from the ground up, from local communities in the first two cities to adopt this concept – Dallas and Los Angeles – to all levels of relevant US government organisations. Uber Elevate has also reached out to governments from other countries that have expressed interest, including Australia (with Melbourne announced in the Summit as the third city), Brazil, Japan, India, and France. They partnered with eVTOL manufacturers, infrastructure designers and constructors, a ground service provider, and they have been working together to identify requirements and design their concept of operations. They have also been doing a lot of work in addressing public perception and acceptance issues, focusing on safety, noise and environmental impacts (surprisingly, security was rarely, if ever, mentioned during this Summit).

Boeing HorizonX Ventures Managing Director Brian Schettler mentioned that they have come across over 160 eVTOL platforms in the last couple of years. According to World eVTOL Aircraft Directory, there are 66 vectored lift aircraft models, 23 lift+cruise aircraft models, 43 wingless (multicopter) aircraft models, and 14 electric rotorcraft models under various stages of development. 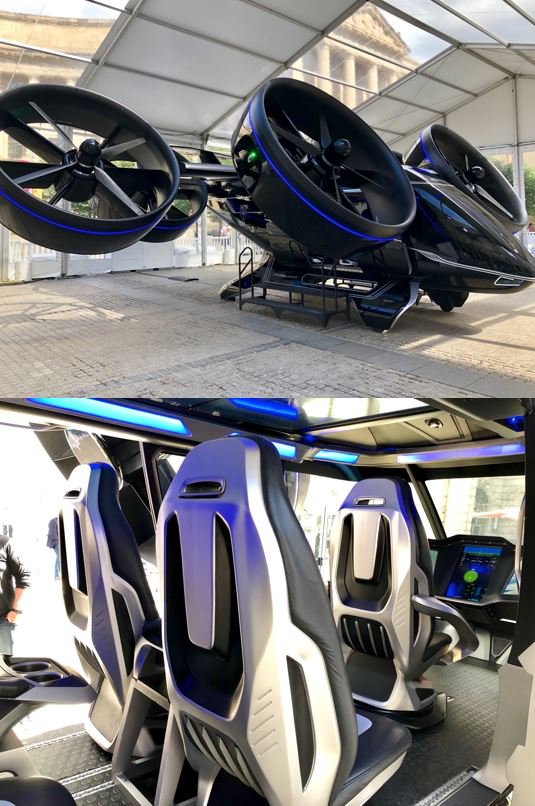 Uber Elevate is partnering with six manufacturers: EmbraerX, Bell, Pipistrel Vertical Solutions, Aurora, Karem, and, more recently (as announced in the Summit), Jaunt. They will be looking at speed-payload-range characteristics of these aircraft, alongside their sustainability and green credentials and, of course, safety and reliability. 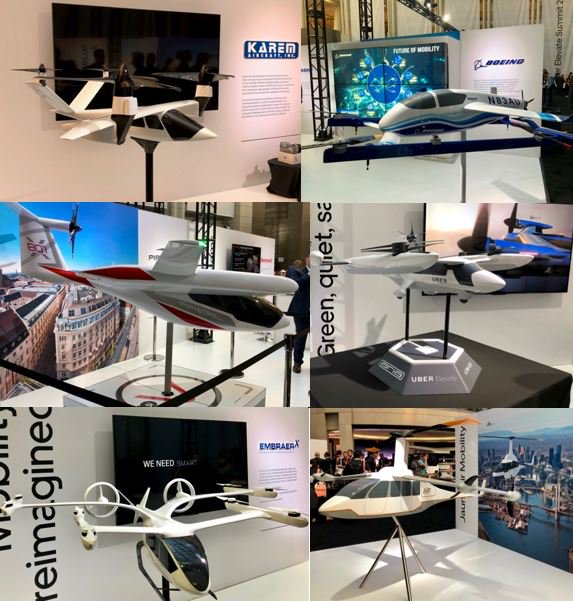 Above: eVTOL models displayed during the Summit (left to right, top to bottom) Karem Butterfly, Boeing Aurora PAV, Pipistrel 801, UberAir eRM-003 Aria, EmbraerX, Jaunt ROSA. The Butterfly is the only one here using vectored thrust; the others opted for completely independent thrusters used for cruise and lift.

Currently there are no specific certification requirements for eVTOL, so in the US most manufacturers are looking at compliance with either Part 23 (Normal, Utility, Acrobatic, and Commuter Category Airplanes), or Part 27 (Normal Category Rotorcraft). UberAir will be operating under Part 135 (Charter-Type Services). There are some unchartered territories with the type of design, power plant and operations so new standards and regulations will need to be developed. At the moment, additional standards are usually addressed with Special Conditions. Historically, development of new regulations using consensus approach takes a long time, so they need to do something differently to achieve it at a quicker pace. Undoubtedly, harmonisation with other regulatory bodies especially EASA is paramount, and the requirements need to be performance-based to allow alternative means of compliance that would embrace innovations.

With data from their ridesharing operation, Uber can analyse ground traffic demands and use the information to determine the best location for skyports and develop their network. The intent is to transform transportation from a two-dimensional space to a three-dimensional one, creating more flexibility, and ultimately precision when autonomous operation is in place.

The sceptics in us will always wonder if aerial ridesharing will ever be more appealing to public than travelling on a well-designed public transport system, and that’s why Uber has to get these elements right: the aircraft design, skyport locations and design, route planning and passenger experience.

The Summit presented skyport designs by SHoP Architects, Gensler, Pickard Chilton/Arup, and Corgan. These designs are very much conceptual, as eventually further requirements will determine the end product: electrification system requirements, aircraft technical requirements, target capacity of people and aircraft, aviation safety/security standards, weather limitations and so much more. So far, the architects envision skyports to be a multi-use building that serves as a community hub, by repurposing existing structures or using sustainable materials. Like everything else in this UAM ecosystem, skyport (and megaport) development will need significant investments and careful planning, and be sensitive to the needs of the communities it will be supporting.

There is currently no established technology or procedure to manage low-altitude airspace and unmanned aircraft system (UAS) operations. As civilian application of the use of this airspace is growing, including future UAM operation, UAS traffic management (UTM) system for low altitude airspace is needed. A lot of research on UTM technology is being conducted, spearheaded by NASA, with the aim of designing airspace and corridors, and providing services such as such as dynamic geofencing, severe weather and wind avoidance, congestion management, terrain avoidance, routing, separation management, sequencing and spacing, and contingency management.  NASA is expected to provide airspace integration requirements as a result of this research to the FAA in 2019, for further testing. 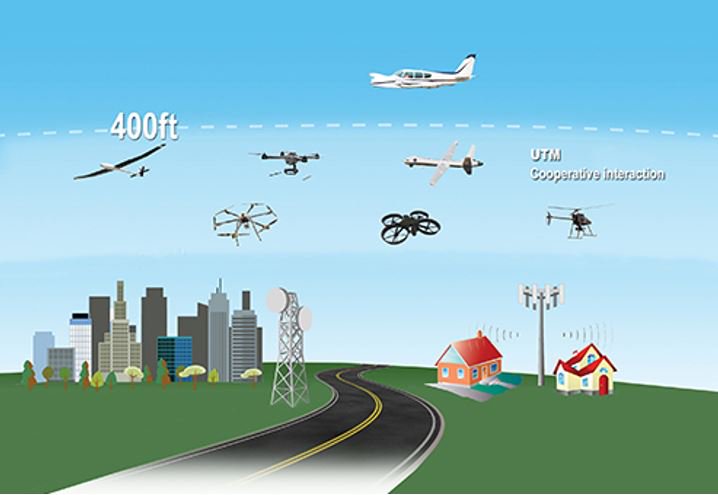 What keeps me awake at night: new players, technology and system interactions to think (worry) about

Many of these new ‘players’ in the eVTOL ecosystems are not coming from ‘traditional’ aviation industry, so there are some critical gaps in experience, knowledge and skills, particularly when it comes to safety. Of course, their new perspectives and approaches to problem-solving could inject a much-needed freshness and out-of-the-box thinking – perhaps even freedom from decades of legacy – on how aviation safety is managed. However, there are too many new elements and potentially unexpected system interactions that we cannot yet abandon the “crawl, walk, run” concept conveyed by FAA Acting Administrator Dan Elwell.

Sure, the seemingly unhurried and pedantic nature of aviation regulatory processes is probably having an effect to fast-paced Silicon Valley folks in the way holy water is to vampires, but the system works like that for a reason. It needs evidence. As most of the elements that have been introduced in urban air mobility concepts are new, test and operational data will be required to develop more accurate and realistic risk and reliability assessments. This is why the FAA hinted at trials and initial operations over areas with low population density before launching into full-scale operations, and why UberAir’s target for initial certified operations in 2023 feels slightly premature.

Brian Schettler, Managing Director of Boeing HorizonX Ventures could not have delivered this message clearer:

“… we admire and appreciate the bold visions that [they] are putting out there, but we want to see that tempered with appreciation and respect for the challenges of doing this in aviation and aerospace… and having that be the core of the thinking and design from the very beginning, and not just an afterthought…”

What keeps me awake at night is the potential transference of tech culture where developers roll out a ‘beta version’ hoping the users will report bugs that will then be addressed in the next update. In aviation, that might actually cost lives. ‘Falling forward’ may be a great concept in Silicon Valley, but not when the consequence is catastrophic. We do want to see aviation being “cool again” (I obviously missed the memo saying it had stopped being cool at some point), but more importantly we want to see the innovators and the regulators meeting in the middle, combining the best of both worlds. Sure, we may never be able to identify all hazards during design and testing stages, particularly those borne from the interactions of systems, but we do not ever want to see ‘unfinished’ systems taking off (and taking lives).

What I'm excited about: Uber's approach to data analysis and aviation safety management

The prospect of a forward-looking, data-driven company like Uber to delve into air travel is truly exciting in terms of how it could develop its safety management system. Not many airlines are willing to invest on employing data scientists to make the best of their data, but with data science being at the heart of tech companies, UberAir’s flight data monitoring and analysis could be a really powerful means to improve both safety and efficiency. There will be a plethora of data sources, and that means a huge potential to provide real-time proactive and predictive risk management tools for various aspects of their operations. When Uber appointed its Head of Aviation Safety with a proven track record in commercial aviation safety, John Illson, they acknowledged this potential and at the same time showed the appreciation and respect on how things are done in aviation. A positive safety culture will drive what and how data are collected, analysed, and used, so leadership will be critical in shaping this approach.

Food for thought: challenges for accident and incident investigators

From technical aspects, there is the complexity of eVTOL vehicle design and battery system, which will have different failure modes than current aircraft. Operationally, they will be looking at low altitude operation and traffic management over urban areas, with vertical takeoffs and landings from the skyports multiple times a day on a quick turnaround time. The potential effects of microclimates in cities such as smog/fog, wind/air movements, temperature variations, could be another aspect to consider.

Investigating fully autonomous operations will probably require different/new set of investigative techniques/skills. In any case, there will be a lot of data that can be used to support the investigation, so the challenge for the investigators is to be aware of what data are available and how to analyse them.

There might be ‘new’ human factor implications from these technical, operational and environmental elements and their interactions. Human factor aspects of single pilot operations on an aircraft with (potentially) a high level of automation is still an area that needs further research, particularly in function and role allocations, decision-making processes, and shared situation awareness among agents in the ecosystem.

Organisational and safety culture could be influenced by a different kind of company ethos and subcultures, as well as type of operation, so that would be another important area to explore.

Finally, in this prime example of ‘system of systems’, epidemiological accident models may not be sufficient in some cases, and systemic accident models might be more appropriate in analysing the control and feedback mechanisms between the systems. Investigators and regulators will need to look at how operational experience is fed back to evaluate the effectiveness of the newly developed safety standards for the aircraft and the operations, and continuously improve them.

To find out what it might be like to study a Transport Systems course at Cranfield University, check out the video below.