What are the safety implications of no fault found?

No Fault Found (NFF) is a concept associated with maintenance. Better understanding of NFF and which maintenance work orders (MWO) are NFF is important because it allows better estimates of the cost of NFF. In ARINC 672, one estimate was given of $200k/year per aircraft within the airline industry. Similar figures were suggested in the military air domain. Indeed, in 2015 one estimate was that it cost the DOD $2 billion annually. (Aerospace America, February 2015).

When a fault is reported and an asset is checked by a maintainer it will result in one of two outcomes. Either a fault will be diagnosed (and presumably fixed) or no fault will be found. This is then an NFF event. The practical impact is typically that the asset will be returned to service. 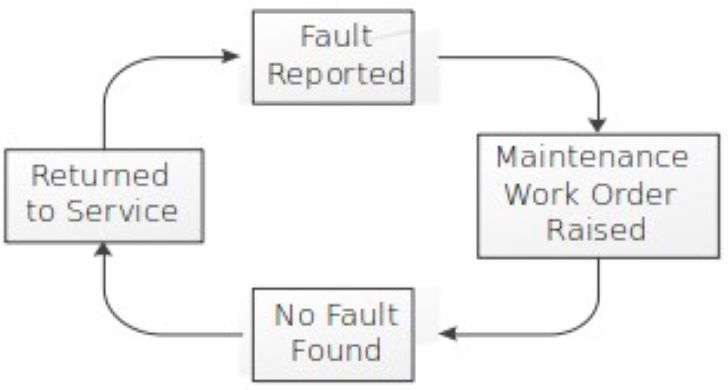 However, the ground truth of the situation is a little murkier. This NFF event could represent one of two possible states. Either there has been a reporting failure and the asset has been submitted for maintenance where there was no fault or there has been a diagnostic error in maintenance. This raises some intriguing implications for the safe use of the asset.

If there was a reporting failure this human error (while understandable) could correspond with an imperfect conceptualisation in the mind of the user of how the asset performs and a misinterpretation of normal activity to represent a potential fault. The decision options are represented in the following user confusion matrix.

This first type of NFF has safety implications due to this limited conceptualisation. If the user does not correctly understand their asset can they use it safely when presented with unusual events? Improving this user behaviour could focus on improving user integration as the system being used bears responsibility through its design, making it more or less usable and understandable.

The second type of NFF also has a more direct and understandable safety impact. This second decision space is represented in this maintainer confusion matrix.

In particular, it is this False Negative condition we are interested in as it results in a faulty asset being returned to service. This has obvious immediate safety implications. The False Positive result here is wasteful from a cost perspective but the safety impact here is more of a second order impact as unnecessary maintenance actions can increase systems degradation rates and, as with all maintenance actions, come with the potential for error.
Here again, improvements are not solely human-focused. Diagnostic tools can almost always stand to be improved due to cost/benefit concerns. Engineering judgement, as ever, must be exercised in the choice of tools with due consideration to the cost of error. The uneasy choices we all must face to balance our budgets with our needs but a little more understanding of the lifecycle impacts as with the NFF discussion is at least an interesting consideration to assist you in future.

Some colleagues and I did some work to create an AI, which could predict whether particular maintenance events could be NFF, based on the maintainer reports. It can be found here.

NFF rates were estimated to be between 7% to 20% based on different methods. There was, however, good agreement between the independent experts' classification of maintainer events and our AI, which was very interesting. This Venn diagram shows the intersection of the sets of MWOs predicted as NFF by the different methods. The numbers are the % coverage of each section. In total, 23.7% of the MWO were predicted NFF by the three methods combined with the 20.35% of MWO being the highest predicted NFF rate of the three. 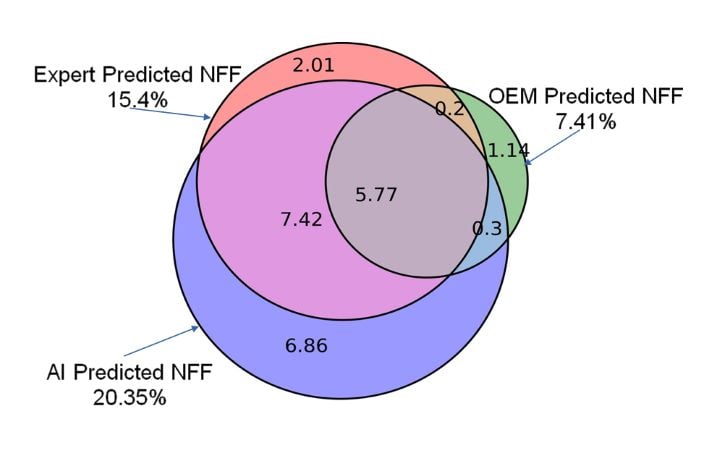 The use of AI was a major benefit as it allows prediction of NFF rates in a matter of seconds for large amounts of MWOs in a database and the trending of NFF rates through time. This is of interest to future work, so we can look at the impact of changes to procedures and training to NFF rates. 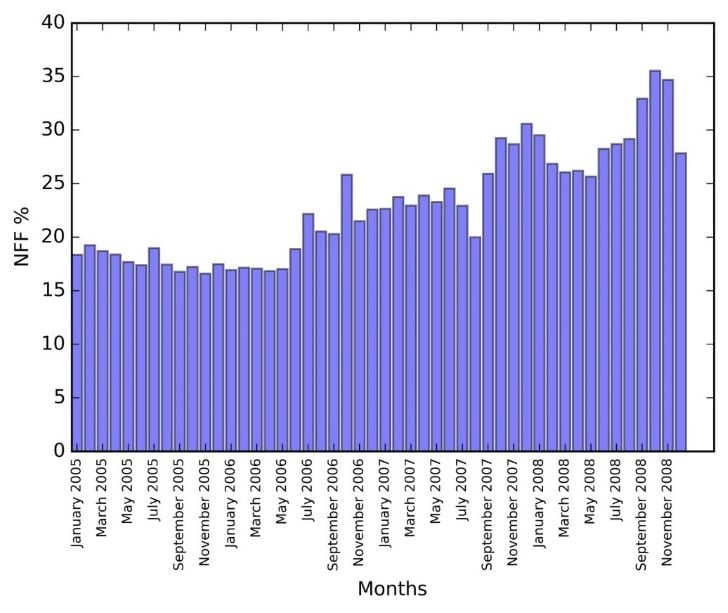 Ultimately, there will almost always be some level of NFF within maintenance and operation of any asset but, with proper understanding, its cost and safety impacts can at least be minimised. Hopefully, you have found no fault in this article (NFF) and if you are interested in the topic, why not get in touch to discuss learning more about NFF and airworthiness.