Who chooses your spokesperson?

This blog post is by author, Linda Tavlin, communications expert, and international consultant and Cranfield instructor, who has trained aviation organisations all over the world including AirAsia and Swiss Air.

What is the definition of a spokesperson?

Would you be surprised if I say the answer is the person who chooses the spokesperson is NOT the organisation but rather the people who ask the question? If any employee can be asked a question by any audience, that is a lot of potential spokespeople within any organisation.

The first question we have to ask is, “What is the definition of a spokesperson?” The most general definition is, “someone who is elected or engaged to speak on behalf of others.” We can define “speak” as to say something in order to convey information. That means anyone reading this is vulnerable – like it or not!

If you agree with the above definitions, then we can proceed to one of the biggest mistakes the industry makes in communication, which is to define communication only as dealing with the media and families. In my thirty plus years in industry, I will hear communication defined this way in 90% of the workshops/classes I conduct.

This gives a false sense of complacency because most organisations have policies in place that prevent employees from talking to the media, so employees believe they are protected, and can defer the media to someone else. The interesting thing is that employees are given the responsibility of budgets, personnel decisions, and other responsibilities where they have peoples’ lives in their hands, but they fear more for their jobs if they inadvertently, through no fault of their own, end up on the evening news. We all know that in today’s world of social media any employee of any organisation can end up on the evening news, YouTube or anywhere else on the internet due to cell phones.

Organisations talk about “holding statements.” In today’s world of instantaneous information, I ask what anyone thinks the media or anyone else is “holding” for? That is a PR cliché that does not fool anyone; certainly not the media. The words that come out of one’s mouth ARE the statement. Isn’t it better to give “the reason” than the excuse – excuses being, “I’m not authorised to speak,” or “I’m waiting for executives to get here” or “you’ll have to call our office of corporate communication?”

If something happens in Tokyo and the media are asking your man on the ground in Tokyo a question, it’s because they want an answer from your man on the ground in Tokyo. To tell them to “call headquarters,” which might be in London, accomplishes several things. First, it fuels adversary. Second, it elevates the event. Third, they are most likely going to go with what they have at that minute because they know that the “call headquarters” strategy is nothing more than an internal political turf issue.

Let’s face it. What is the point of positioning someone half way across the world in charge of an operation and not empowering him or her to represent the organisation externally in a particular instance? What corporations say to me is, “We cannot run the risk of having one of our employees running off at the mouth to the media.” What I say is, “In my 30 plus year career, I have never once heard a professional say that they can’t wait to face hordes of media blasting questions at them in the aftermath of a corporate tragedy in the hopes of international exposure.” So, who are these policies kidding? If things go wrong, it is because of the strategy that is in place within that organisation BEFORE anything ever occurs, NOT because of the media.

Your communication strategist - the reality

As far as families go it is true that not everyone possesses the special skills needed to deal with this group. Anyone who knows me or has been in one of my classes knows I am one of those people. The families fall into the category of the emotional audience but also in this audience is anyone who identifies with the families. They want an organisation to be sympathetic and accessible – accessible meaning you must come forward, face them and answer their questions to the extent you can. A person on the spot at the location of occurrence is the one who needs to be accessible. This goes from a small to a large-scale event.

Thinking that communication just involves these two groups and can be managed – or controlled – by a select number of individuals or groups is a misunderstanding as to what the true meaning of communication is and who is involved.

The media are the first to go after an event. Long after they go, someone in an organisation will have to answer for what happened. This goes for not just operators but regulators, manufacturers, controllers, airports and other parties of interest. Since these events are technical events, the people with the qualifications to answer for these issues are going to be, in reality, the ones communicating. The issues are operations, maintenance, engineering, ATC, weather/environment and security/terrorism with the sub-issues. (No one has ever asked me what kind of wine was served on Swissair prior to their crash.)

It is not any organisation's “communication policy” from on high that investigators, regulators, lawyers or the judiciary (depending on the country) care about when they call upon your technical experts to answer for what happened. Therefore, an organisation's outcome is only going to be as good as these individuals’ ability to communicate effectively with those who have called upon them to do so. 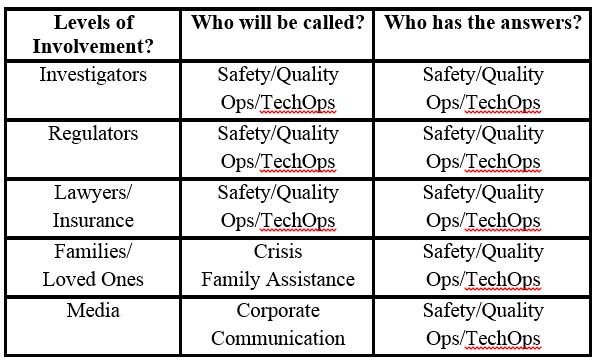 In the above table you can see the levels of communication and the reality of who communicates. I put emphasis on the world “REALITY.”  It can be explained like this. The investigators are the leaders. They are in control of the event. When they walk into an organisation, they choose with whom they speak.  They are not coming into the offices of human resources, corporate communication or anything similar. The regulators are coming in to look at compliance, paperwork, training, etc. They are coming into the same departments as the investigators. They choose with whom they speak. People will have to answer for what happened and when the courts call, you go. The families are the group who can never be restored to the life they knew before. The number one question they want answered is, “Why is my loved one dead.” The family assistance people, who are the people facing them, do not have the answer to that question. 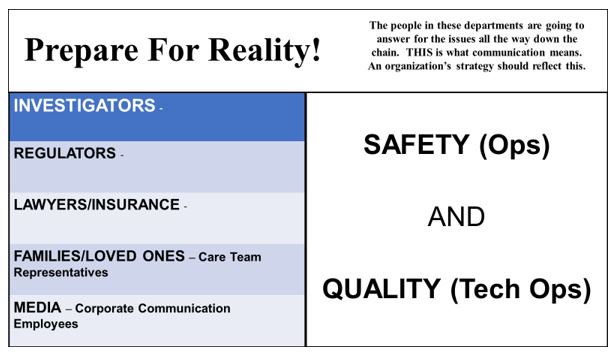 None of these PR clichés used such as holding statements and the rest that are so obviously copied from company to company have anything to do with getting it right.  If you have the reasons correct and understand the process, that is what you give. It is the ultimate safety net that organisations who get it correct use.

In future blogs we’ll discuss the ultimate safety net, potential parties to an event, their styles of communicating and how to take that into consideration in addition to how to avoid the clichés that are so obviously wrong and lead to the communication “Crash and Burn after the Crash and Burn.” This information is in my upcoming book, Aviation Communication: Strategy and Messages to Ensure Success and Prevent Failures, which can be preordered at this link.